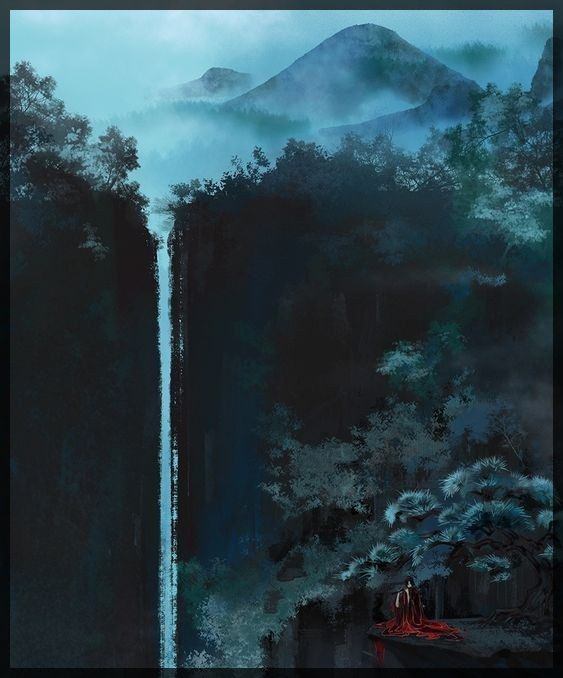 If the people who’d spilled their blood, sweat, and tears to acquire those items were to learn that Yun Wu had deemed said items worthy of serving as mere padding for her space dimension, how many of those people would die from anger?

When Long San saw her start to casually throw things into her dimension, a thoughtful smile flickered across his eyes. Perhaps in this entire world, only this woman would be so audacious.

She assumed that the fifth floor would be filled with the most precious, top-grade treasures… but when she got there, she saw that she couldn’t have been more wrong. The entire floor was empty, save for a black box that was sitting atop a high platform.

There was only a box? It must contain an extraordinary treasure then!

Unable to hold back her curiosity, she immediately stepped toward to seize the box. However, before she could touch it, a larger hand grabbed her and pulled her back a few steps.

She furrowed her brows as she watched Long San stride past her. The man used his body to block her view of the platform, and then he reached out to open the box.

The moment he came into contact with it, a tiny and poisonous crimson-red snake darted out from nowhere and bit him on the back of his hand… but strangely enough, the poison didn’t affect him. It was the snake that ended up dying.

Long San turned his hand over and hid the dead snake by sliding it down his sleeve. A faint white glow enveloped his hand before the bite mark on it disappeared without a trace. By the time Yun Wu reached his side, Long San had already resumed his previous “sidekick” image and fawningly delivered the box to her.

“Friend, here. Quick, open it and see what’s inside.”

Yun Wu narrowed her eyes. She grabbed his hand and ran her scrutinizing gaze over it a few times.

Smooth and without injury.

A deep crease formed between her brows.

“Friend, why are you looking at my hand? I just wanted you to see what kind of treasure is inside,” Long San asked, seemingly nervous.

The expression in Yun Wu’s eyes darkened with doubt. “I clearly just heard the sound of a snake attacking, how come…”

“What… snake? Where? Where? Snakes are so scary!” Long San cried out. Swiftly, he launched himself at her and clung onto her body.

And with that, all of her doubt was abruptly replaced by anger.

“Stand up properly! If you dare casually hug me again, watch me slice you into mincemeat,” Yun Wu snarled. She hated when people touched her. As she peeled the “timid-as-a-mouse” Long San off of her body, she could barely refrain from kicking him away.

Perhaps her warning had really scared him because despite his shaking legs, he obediently settled down. Another irritated glare was sent his way before she finally opened the box. Immediately upon seeing its contents, her lips started to twitch. Aggressively.

She’d thought that even if it wasn’t some rare treasure, it’d at least be something like a special item or a pill! However, what laid before her eyes was a tiny red bean. Moreover, it was an old and shriveled up bean. She picked it up and turned it left and then right, but no matter how she looked, it was still just a red bean.

Having all of her anticipation deflated like that made her feel a bit upset. She furrowed her brows and cursed, “Is everyone in the imperial family retarded or something? How is this little dried up bean a treasure?”

She hadn’t noticed the look of shock that appeared in Long San’s eyes when he first caught sight of the bean.

Yun Wu turned her head and squinted, “Seed? How do you know?”

“My, my homeland has this kind of seed. It will blossom into a beautiful flower. Really, I’m not lying.”

Blossom into a beautiful flower?

After one more glance at the red bean, she thought for a moment and then tossed it into her space dimension. She actually didn’t like flowers that much, but if she could one day live a life of leisure, then she wouldn’t mind taking the seed out to help her nurture her own temperament.

There was nothing else in the room.

Since the Flower of a Thousand Lives was still nowhere to be found, it was probably already taken out of the treasury beforehand. If that was the case, then the only thing they could do was return to the Imperial Beast Forest and act accordingly.

By the time they reached the third floor, Long San had already understood what she meant by “interest.”

Anywhere she went would be swept bare, and soon, the third floor was left with only empty shelves. This level of cruelty made even him raise his eyebrows.

By the time they reached the second floor, Long San, who was standing behind her, was wearing a funny smile on his face. His eyes were dyed with its usual devilish glow as he murmured to himself, “What a cute little pipsqueak!”

Again, with just a few waves of her hand, everything was thrown into her space dimension. Yun Wu noticed that no matter how many items she put in there, the dimension still appeared empty. This was when she realized that the items would shrink to half of its original size when it was placed into the dimension.

This greatly reduced the amount of space taken up, which made Yun Wu very happy. She headed for the first floor, intent on ransacking the entire treasury to anger the Emperor and Empress to death, but right at that moment…

Faint footsteps could be heard coming from outside.

“Long San, you leave first!” Yun Wu immediately ordered the man behind her. Without waiting for his reaction, she hastily made her way to the first floor. As expected, the first floor was much more spacious than the other floors, and it was filled to the brim with not only gold and jewelry, but also plenty of good weapons, strange and colorful stones, and things that resembled crystal balls.

Since she was running out of time, she sped around the floor blindly pouring everything into her space. When the sound of a lock opening entered her ears, her figure flashed and instantly appeared on the second floor, where she had made the opening earlier.

Unfortunately, right as she was about to make her escape, a powerful aura descended on her.

“Who are you? To dare intrude the imperial treasury… You won’t be leaving with your life.”

When Yun Wu saw the old treasury guardian, her heart tightened. It appeared that Long Qingxie hadn’t been able to finish him off. Fortunately, her face was already covered from when she made preparations earlier.

Out of the corner of her eye, she saw that in the distance, a middle-aged man, dressed in yellow imperial robes, was approaching with a large number of guards. This surprised her a bit.

Who would’ve expected this operation to attract even the old man Emperor over?

Despite that, she wasn’t too flustered. Her years as a killer had long tempered her mind and heart.

If she couldn’t fight them, then… run!

What good would dignity be if she was dead?

Seeing the old expert fly towards her, she quickly brandished her hand and aimed a poisonous needle at him. When he moved to dodge, she immediately took advantage of the brief respite to dash towards the back of the treasury.

Raising her hand again, she shot a thin strand of silkworm thread out to latch onto a distant tree before kicking off. Her body launched into the air. Once she was at a reasonable distance from the ground, she extracted her silkworm thread. Earlier, she had already familiarized herself with the treasury’s surroundings so that in case of an emergency, she could escape in the quickest time possible.

In the blink of an eye, she landed on the ground and quickly burrowed into the secret passage. She could faintly sense that the old expert had also landed and was giving chase. She decided against escaping through the path she had arrived, lest she bump into Long San and drag him into this mess with her.

Fortunately, the passage branched off elaborately, so she randomly picked a route to follow. Only, it seemed that her luck wasn’t very good. As soon as she left the passage, she found herself on a cliff; it was a dead end.

And not long after she left the passageway, the old expert also emerged.

“Child, let’s see where you can run to now.” The cold voice carried with it traces of anger. The old expert’s face was very gloomy, as if he had really been thoroughly provoked. Without waiting for her to respond, a ray of cyan battle spirit flashed, and he manifested three blue arrows. They shot towards Yun Wu at an alarming speed.

Her face fell, and she quickly released a burst of magenta battle spirit. She manifested a sword and intended to defect the arrows with it.

Yun Wu only felt a strong force push against her before she was forced back a few steps.

“Give me your life!” The old expert raged as a powerful aura began to rise. Again, three arrows appeared and flew towards her. A sense of crisis took over Yun Wu, and she tried to use her sword to defect the arrows again, but…

All three arrows went straight for her chest, and she subconsciously fell back. However, she’d forgotten that she was on a cliff. The moment she lost her footing, she felt an arrowhead break through her spirit armor and sink into her chest, where excruciating pain began to spread.

At the same time, one of her poisonous needles also hit the old expert, causing his expression to change drastically.

As she’d said before, anyone who wanted to take her life must pay in blood.

The scene of her falling off the cliff just so happened to be seen by Long Qingxie, who had been hurriedly making his way to her. Instantly, murderous bloodthirst dyed his deep eyes as his rage soared to the heavens.

“You dare hurt her…”

An earth-shattering roar of anger, akin to a wild beast’s, cut through the air. Then, a shaft of strange light shot out from both of his eyes, and before the old expert even had time to panic, his body was suddenly blown into pieces. Blood, organs, and guts splattered everywhere.

Long Qingxie’s devilish face was extremely cold as he stepped past the gore and unhesitantly leaped off the cliff.

Layers upon layers of mist shrouded the area below as he plunged downwards.

Under the sharp pain coming from her chest, Yun Wu felt a moment of sluggishness. However, it would take more than that to kill her.

Just as she caught her breath and prepared to use her silkworm thread to slow down her fall, she looked up and caught sight of that silver-haired man recklessly hurling down towards her.