Please don’t repost this translation anywhere and only read the translation on this page and on isohungrytls.

Chapter 25: Part 2 — He didn’t want to be troubled and didn’t want anyone to trouble his marriage.

After the popcorn was half finished, Jiang Jingchuan decided to buy another bucket of popcorn. Seeing this, Su Yan’s eyes narrowed in laughter as she ate another piece of popcorn; she nodded in satisfaction. Jiang Jingchuan didn’t share the same look.

While she was complimenting Jiang Jingchuan in her heart, he abruptly said: “You cannot eat any more for the next month. Eating too much of this is bad for the body. It is a special treat for this evening.”

Su Yan was dismayed. She finished all the popcorn for one month in one evening?!

She pretended to not hear it while criticizing him inside and continued to eat the popcorn seriously.

Anyway, when he would go to work, she would make Auntie Wang buy it. He would not know.

Who knew that Jiang Jingchuan wasn’t that slow, “I will also warn Auntie Wang. I trust that you won’t be careless.”

Do you not feel distressed looking at your wife suffering a setback?

The broadcast inside the hub reminded the public it was time to enter the movie hall. Jiang Jingchuan led Su Yan to the entrance to get 3D glasses and entered Hall 3. Jiang Jingchuan had chosen great seats. After they sat down, the large screen began to display ads. Su Yan looked around the entire hall to find out there weren’t many people. She pulled Jiang Jingchuan’s sleeves she whispered: “Why are there so few people?”

Su Yan was shocked. To have asked such a question… she had gotten too relaxed. She glanced sideways at Jiang Jingchuan and found that he didn’t care; she sighed in relief.

She seemed to have become careless lately, she hadn’t even considered the implications before asking Jiang Jingchuan.

It was very comfortable in the couple seats. Jiang Jingchuan naturally held Su Yan’s hand. Su Yan also took things as they came and leaned against his shoulder, same as the other couples in the Hall.

The plot was very simple, but the sound effects were great. Jiang Jingchuan just wanted to pass time. He looked at Su Yan in fascination. Till the lights turned back on inside the Hall, they were still lost in the mood. They stood up and saw that other couples were still sitting waiting for any post credit surprises1 Post credit surprises also include the post credit scenes..

By the time the movie finished, it was almost 10 o’clock. The winds were blowing fiercely outside; the weather was still good during the day but now it was very chilly. They could see many girls trying hard to press down their skirts while walking, in fear that the wind would end up blowing their skirts up and flashing others.

Seeing that, Jiang Jingchuan immediately removed his coat and draped it over Su Yan without thinking much about it. Su Yan was wearing flat shoes today. When they stood together, she normally reached his shoulder; but now, with his coat draped over her, she looked like a child who had stolen an adult’s clothes. But because the coat was draped over her and Jiang Jingchuan was embracing her with one arm, under the evil winds, he managed to safely lead Su Yan to the place they had parked their car.

Driving back to the Villa, the butler and Auntie Wang had already been informed of their late arrival. Now it was already time to sleep. Su Yan went to the bathroom inside their bedroom while Jiang Jingchuan took his nightclothes and went to the guest room next door to take a bath. Men bathe quickly compared to women. Jiang Jingchuan returned to the bedroom, his hair still wet. Su Yan still hadn’t come out of the bathroom. He sat on the bedside and while rubbing his hair with the towel, he happened to notice the soft Wang Zi jellies on the teapoy.

He felt as if it was the doings of ghosts and Gods. He walked past the bed to sit on the sofa. Picking up the pack of candies, his thoughts wandered far away. To Jiang Jingchuan it represented his childhood.

While Jiang Jingchuan was immersed in his childhood memories, Su Yan came out. Seeing this scene, she immediately understood. She calmly came over, “Do not laugh at me.”

“Huh?” Jiang Jingchuan, hearing her voice, came back to his senses and stared blankly at Su Yan.

Su Yan took advantage to sit beside him, grabbing a few jellies in the process. She had the appearance as if recalling some memories, “This is the candy I liked to eat in childhood. A few days ago I had gone to the supermarket with Auntie Wang for some matter and saw them and bought it. So do not ridicule me.”

……as if she remembered that.

Her memory was of Tanghulu2 See the translator note for the picture of delicious tanghulu..

However, it was almost the same.

Looking at Jiang Jingchuan not saying a word, Su Yan immediately took out some jelly candies and put one before his mouth, hinting at him to open his mouth, “Have you not eaten it yet? It is delicious. Try it.”

When the familiar taste spread in his mouth, it seemed as if a key opened something in his heart. He looked at the large eyed doll on the package and said under his breath: “I’ve eaten it.”

Some people said that night time was the most vulnerable time for people. You must refrain from having arguments and not say anything because you would regret it the next day.

In this situation, Jiang Jingchuan couldn’t hold back his feelings. His voice was low and gentle, “When I was a child, I used to go and stay at my maternal grandmother’s house during the summer holidays. She was very good to me. You probably know that my mother was a child of an ordinary family. Every time I went there, grandma wanted to give me the best. She knew that the best she could give was nothing to me. Even then, I still liked going there the most.”

Since childhood he was treated and trained as the heir. In the Jiang Family no one treated him as a child. It seemed that no matter how many courses were taught or how many assignments were given no one would ask if he was tired.

Of course, he held no resentment. He was already born in such a family where he had already won at the starting line. He needed to put forth many times the effort.

When maternal grandmother saw him doing homework, only she would feel distressed looking at him and fan him with a cattail-leaf fan. She would say, “How come there’s so much homework? Won’t your hand rot? Do you want to take a rest?”

Only from grandma could he feel the doting of a grown up.

He already couldn’t remember the taste of his childhood but only remembered that the candies his grandma used to buy for him were delicious.

Su Yan did not feel good on hearing this. She thought of her own wet nurse. She was born into a rich and influential family. Her ancestors from her father’s side were all big government officials in the Imperial Court. Her mother loved her dearly; but, due to the customs of the rear residence, the two of them weren’t allowed to spend much time together. Her wet nurse stayed beside her from the time she was born and took care of her daily life and necessities. She had heard that the wet nurse had a child who had died of an illness, therefore the wet nurse treated Su Yan as her own child.

As the unmarried daughter of a Noble house she was almost never allowed to go outside. When she heard people talk about Tanghulu, she threw a tantrum about wanting to eat it to her wet nurse. The wet nurse had no way out, so she used to secretly go outside and buy them for her.

Until the day that misfortune struck. The wet nurse was scared to death, yet she continued to comfort her. She was hidden inside the top of a kitchen range. She still remembered the wet nurse’s last words.

After that, she was sent to the Imperial Palace by the Empress Dowager.

Since then, she never told anyone that she liked to eat Tanghulu. She had practically grown overnight.

Su Yan knew she should say something now, but she found it hard to speak. She just sat there silently.

Jiang Jingchuan continued: “Grandma became very sick later. No matter how hard I tried, I couldn’t save her. Can you believe it? Until the day she closed her eyes, I believed that she was getting better and better. How could I have been so naive? If there is one thing I will regret my whole life, it is that I wanted, no, should have treated her at least a bit better when she was alive. I always feel that what I did wasn’t enough.”

Su Yan didn’t want to listen anymore otherwise she would end up remembering the things she had buried deep in her heart. She impulsively hugged Jiang Jingchuan and didn’t say anything.

Jiang Jingchuan smelled a light lemon fragrance from Su Yan; it made him remember many things. He hugged her back tightly.

Well, there was another thing he regretted: He couldn’t let his maternal grandma meet his wife.

That night, no one was in the mood for thunder and fire. Jiang Jingchuan continued to hold Su Yan and didn’t let go. He felt that no matter how much he hugged her it was never enough. He really liked it.

Barb Notes: I am looking for an editor for my novel translation. If you want to apply please go to the following page- 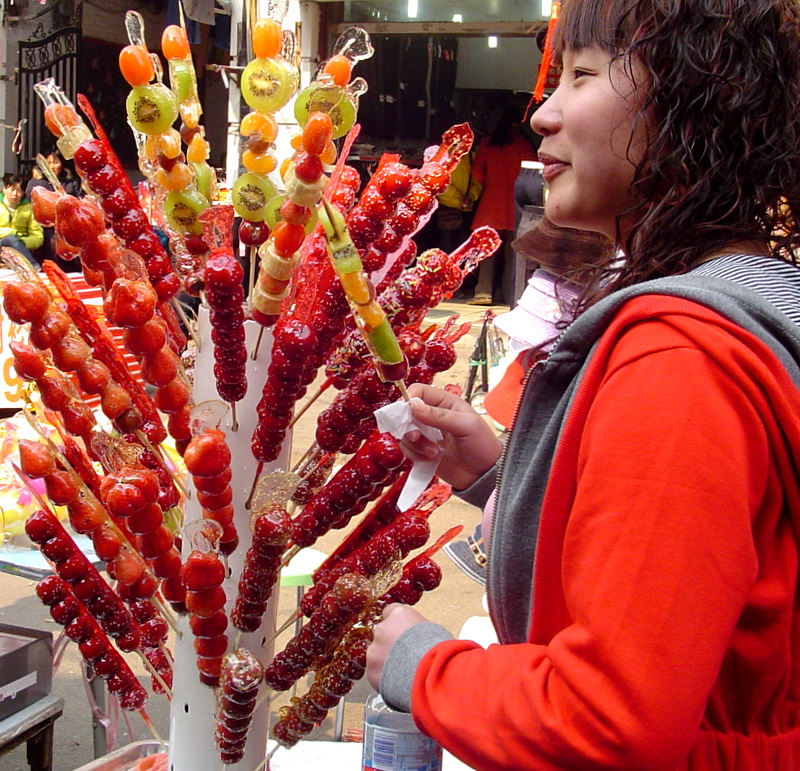 Cat-tail leaf fan from which grandma was fanning Jiang Jingchuan- 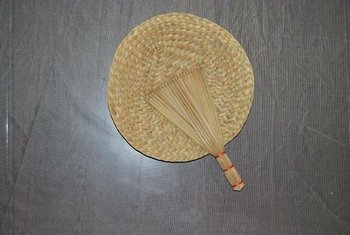