Chapter 14 — Feelings are the most useless things.

Jiang Jingchuan did not like to drink. Normally in social banquets very few dare to brazenly offer him a drink. But today, Sui Sheng urged him to drink again and again. He couldn’t shirk away. Originally, he thought he would drink one cup at most and be done with it. Who knew that the people present were all extremely slick, so Jiang Jingchuan ended up drinking many cups under Sui Sheng’s teasings.

With the help of the driver, Su Yan supported Jiang Jingchuan and placed him in the back seat before following him inside. Jiang Jingchuan’s tolerance for wine was actually very good; at least he wasn’t noisy.

“Madam, shall we go back now?” The driver asked.

Su Yan looked at the already disoriented Jiang Jingchuan and nodded: “Let us return or else they will feel anxious.”

Hearing that answer, the driver started the car and drove along smoothly.

Su Yan actually did not want to go near Jiang Jingchuan right now. His body smelt of wine, and it was not at all a pleasant odour. Who knew if Jiang Jingchuan was truly drunk or perhaps completely conscious? Su Yan had never neglected these fine details from the past till the present. As a result, Su Yan supported Jiang Jingchuan in leaning his head on her shoulder.

Along the way, Jiang Jingchuan’s breath sprayed over her ears, su su ma ma1 Su su ma ma- Sounds of inhaling and exhaling. An onomatopoeia. Su Yan slightly moved her head to look at him sideways. Right now, her mood was complicated.

She remembered His Majesty. Once long ago, she was in the same situation as now; but he was different compared to Jiang Jingchuan– he was not drunk. He had intentionally leaned his head on her shoulder like this. Su Yan wanted to push him but dare not, hence, she could only sit together with him on the stairs and watch the stars in the night sky.

Honestly speaking, she was not a very lovable person at first. She could not hold a candle to the Virtuous Concubine, who was good at understanding others, nor was she equal to the gentle and soft, youngest Concubine Chen. In her initial years inside the Imperial Palace she was like a hedgehog: taking strong precautions against everyone. But he said he had liked her from the beginning. Was he mistaken? With an unlovable person such as herself, he fell in love?

It would be false if she said she did not long to see him again, after all, That Person had occupied her memories for many years. Also, it was because he was there that she could live wanton, free, and unrestrained inside the Imperial Palace, unlike others who acted with great caution.  Even so, she also felt the same unease.

Regardless of the time and place, he would carefully protect her. Su Yan did not want to think about the person who harmed her. Even more, she was unwilling to think about the reaction That Person might have had when she crossed over.

For many years, she had not felt her heart flutter in response to his affection. But she was not heartless, she did not want to see him suffer.

The reason why she walked along with That Person at that time, it all boiled down to standing by his side only due to his Supreme status. If he was not the Emperor and was merely an ordinary man, would she still have followed him? Unlikely.

Affection was the most useless thing. Even though she had earned the right to be a person who was above ten thousand and below one using it, she still felt the same.

While Su Yan was being absent-minded, Jiang Jingchuan unconsciously leaned on her and hugged her. Su Yan finally came back to reality when his hair brushed against her neck. She tugged on Jiang Jingchuan’s big palm.

She was now the wife of this person who could give her the life she desired. The past should not be missed.

When they finally arrived at the villa, Su Yan asked the butler to help the driver support Jiang Jingchuan to the bedroom. After they left the room, Su Yan went to the bathroom, wet Jiang Jingchuan’s towel, and came out. She wiped his face with the wet towel; but did not plan to help him take off his clothes, help him wash, or things like that. Wiping his face was already considered not bad.

Looking at the sheets, Su Yan thought she must have Auntie Wang change the sheets tomorrow. Else she would always smell the wet scent of alcohol.

Jiang Jingchuan wasn’t as drunk as he was a few days ago. He was in a stage of vague consciousness and wasn’t asleep. With the cold towel cleaning his face, he slowly opened his eyes. There wasn’t the careful vigilance in his eyes like usual, instead, they were blank. He carefully identified the person in front of him and said: “Mom, I have worked a lot, feeling tired.”

Su Yan was startled. She could not believe what she was hearing and even thought that she was hallucinating.

Otherwise, this behaviour of carrying grievances and acting like a spoiled child, how can a big man like Jiang Jingchuan say these?

Jiang Jingchuan straightforwardly pulled Su Yan’s hand and stroked it against his face, consoling himself while being extremely nostalgic, “Ma, Vice-President Zhang is not a good creature. He thinks I don’t know. They all feel I am young and am unable to shoulder important responsibility. Ma, I really am working hard so that in future they will not dare to look down on me.”

Su Yan did not know what Jiang Jingchuan was talking about. Don’t know why but looking at such a Jiang Jingchuan, her heart felt upset . When this tool was not drunk, he had the appearance of being able to manage everything well, yet he had this bearing now.

Forget it, must show mercy on him.

Su Yan stretched her free hand to rub his head. Maybe this soothing action would greatly delight Jiang Jingchuan.  He unconsciously put his head on her palm as if saying not to stop.

There was really no way to capture this person, Su Yan should just continue rubbing him using her thigh hugging competence and nature.

After being rubbed for a long time, Jiang Jingchuan finally felt content. He opened his eyes and saw that the person before his eyes was not his mother. Puzzlement flashed through his eyes for a bit, then he finally recognised that this person was his wife. He sighed and said: “Su Yan, I didn’t tell you but I will not forcefully bind you through this marriage. For what reason do you look for me every day?”

It wasn’t over yet. He continued: “I also did not want to marry, but I cannot outspeak grandpa and grandma. My mother and father were mute too. If you were angry, you should have said no, you don’t want to, at an earlier time, okay. Saying that you have resentment now would be like putting the canon after the horse3 Putting the canon after the horse- It is a Chess term. In Chinese Chess, which is Xiangqi or known in the west as Go, there are two Chess pieces called the Horse and the Canon. You have to move the Canon piece in front or before the Horse piece. you can’t move it after the Horse piece because it will be useless. Hence the ML makes such reference.. I didn’t say anything. We got married. If you treat me good, very good, I will consider treating you a bit better. But you don’t treat me even a bit good.”

Su Yan was bewildered. A few days ago he was not drunk like this. Why does he sound like a broken record now? Why did his speech change so much? He was being very talkative.

Without a doubt, she would treat him better.

In future, she can only rely on Jiang Jingchuan for living.

Don’t know whether or not Jiang Jingchuan understood; however, in short, he felt satisfied. But still not able to put his mind at ease, he added a sentence: “You treat me very good, good, I will also treat you good.”

Su Yan, however, did not continue to answer Jiang Jingchuan’s persistent drunken ravings like a broken record. She was thinking, what was the very soft package containing big eyed-doll candy4 Look at the translator’s notes below for the candy.? If she knew it, she would seize the chance and embrace the thigh even more.

These are the possible big doll eyed candies. 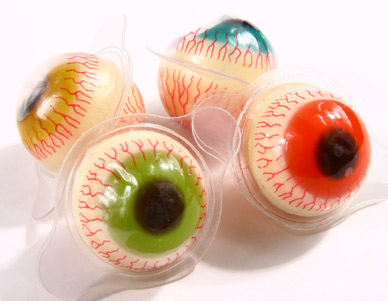