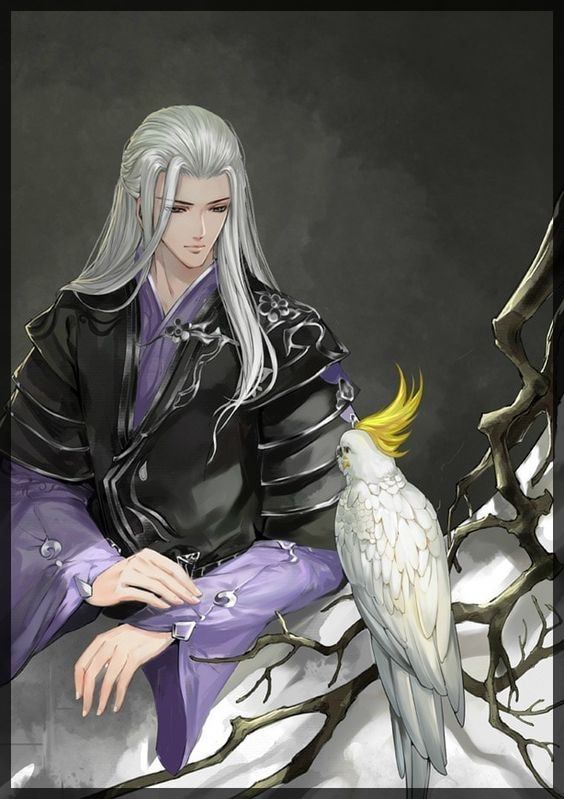 Chapter 33 — Someone You Can’t Afford to Offend

A strong oppressive force erupted when Yun Wu let loose a streak of magenta battle spirit, and the sword that was pressed against her neck and shoulder instantly broke in half.

Bang! Before the surprise could even register on Li Mei’s face, she suddenly felt as though an astronomical amount of weight had slammed into her, abruptly forcing her to the ground. Dust flew into the air, and a human-sized pit formed beneath her body.

If this scene had been witnessed by other people, they would undoubtedly be unable to resist sucking in a breath, and they would be seized by an inexplicable sense of panic. After all, Yun Wu had barely done anything, and yet she’d still managed to single-handedly throw Li Mei off.

Someone capable of throwing a mid-stage Rank Two Practitioner as easily as one would with an old rag, and for that casual attack to dent the forest earth… would a person like that be considered a “good-for-nothing”?

No! If a person like that was considered a “good-for-nothing,” then the greater part of Shenzhou Continent’s population would be considered “trash”!

Yun Wu looked down with apathy in her eyes. Li Mei sprawled a short distance away, rendered incapable of standing up. The pain was too intense, and her ribs seemed to have been broken. A cold glint flickered across Yun Wu’s dark eyes. Then, as if she disdained looking at Li Mei, Yun Wu waved her arm and turned around. Before leaving, she tossed a few words over her shoulder.

“Remember, there are people who you can’t afford to offend. If you reveal what happened today to anyone else, I’ll see to your demise tomorrow.”

With that, her silhouette disappeared into the forest. Li Mei’s eyes contained shock and astonishment, but what showed, for the most part, was actually fury and viciousness. She, Li Mei, was a proud daughter of Heaven. The one looking down on others should be her.

And yet, she had been defeated by a sickly good-for-nothing. She couldn’t allow that woman to stay alive…

All of a sudden, while she was still immersed in her hatred, a deep and devilish voice drawled, “Looks like she’s still a bit too soft-hearted.”

The voice prompted Li Mei, who was filled with anger as she struggled to get up, to turn her head towards the source. When she saw the black face-veiled figure, she wrinkled her brows and became even angrier. “You saw everything that happened just now?”

She received no response.

The damaged and hoarse quality of the man’s voice had completely vanished. Beneath the black veil, his disfigured face revealed a smile, but his deep and inscrutable eyes were dyed with bloodthirst.

“Of course, if the little pipsqueak decides to leave something unfinished, I’ll clean it up for her. I will not allow any incidents to occur, so… enjoy your trip.”

Li Mei was stunned. She wondered what he meant by that, but in the next moment, her pupils suddenly contracted, as though she had seen a demon crawl up from hell. An expression of absolute terror struck her.

The scent of blood quickly pervaded the forest air, attracting the attention of the Timberwolves she had purposely let out prior. When she was found, all that was left of her was a badly mangled and chewed up corpse…

On a steep cliff wall.

A petite body was climbing, slowly but steadily, upwards. She bore resemblance to a gecko. A closer look revealed that there was a strange iron contraption clamped around her upper left arm, and a long rope of silkworm thread draped over the peak of the cliff.

Yun Wu had fastened it together with flexible silkworm thread, knowing that before she became strong enough, she would have to rely on foreign materials to survive.

About half an hour later, she finally reached the top of the cliff. Quietly, she snuck her way into the inner palace grounds.

However, it seemed that she had slightly miscalculated.

After all, even though she had a rough idea of where the treasury was located, she didn’t know exactly how big the palace was. A few rounds later, she found herself lost.

The first attempt was already going so poorly. Then, suddenly, a hoarse yet familiar voice sounded, “There you are, friend. What are you doing?” Long San appeared out of nowhere. As Yun Wu stared at the approaching man, her eyebrows wrinkled, and a trace of murderous intent flickered across her cold eyes.

Why was he here?

Could it be that he was the same as her, a feigned good-for-nothing?

“I got hurt, so I had the big bird send me back early. I didn’t expect to find you in my residence.” Long San showed her the little scratch on his finger to prove that he was “hurt.” Yun Wu shot him a suspicious look.

This was his residence?

She took in her surroundings and discovered that she was in a relatively remote place and that not too far away, there was indeed a tablet that read: Long Xu Pavilion.

Since Long San was an exchanged prince from another country, it wasn’t strange for him to be living within the palace. However, Yun Wu couldn’t be bothered to confirm if he was lying or not. She moved, intent on leaving before he decided to cling onto her again. Unfortunately, before she could even lift her feet, he grabbed onto her hand.

“Friend, what are you playing this time? Let’s play together. Hide-and-seek? Or… do you want to go steal treasures?” He asked in a low whisper. There was a grin on his face. Without waiting for Yun Wu to respond, he continued, “Let’s go, I know a path that will take us directly to the treasury, and no one will see us.”

Again, without waiting for her to respond, Long San seemed to be in high spirits as he sneakily dragged her towards a small pathway. The pathway required one to round a rockery, and within the rockery was a winding network of secret passages that led directly to the back of the treasury.

Long San appeared to be so familiar with the path that it was almost as if he’d forged it himself.

Nonetheless, Long San chuckled and explained, “Everyone who sneaks into the palace wants to steal treasures from the treasury. I’ve already met a bunch of them, so over time, I became familiar with the pathway. Friend, don’t be suspicious. I won’t harm you.”

At that, Yun Wu furrowed her brows. She felt that she just couldn’t see through this Long San and that he wasn’t as simple as he appeared.

After walking for a long while, Long San suddenly turned around. “Friend, once you exit this area, you’ll reach the rear of the treasury. You have to keep your voice down, or else the treasury guardian will catch you.”

They were standing too close to each other. Yun Wu pulled back her hand and retreated a step. “Don’t follow me anymore. Go back.”

Then, she went around him and stepped out of the secret passageway.

The treasury was divided into five levels. On the outside, it appeared plain and ordinary, but it wasn’t hard to tell that this place was like an impregnable fortress. Since it was daytime, the guards weren’t as alert as they would be at night, but they were still on patrol.

Surprisingly, Long San actually listened and didn’t follow after her. Yun Wu didn’t worry about it. She concealed herself and circled around the treasury a few times. After she familiarized herself with her surroundings, she used the same method as before to slowly climb up the back of the treasury.

Entrance of the treasury.

A black-robed elder had been standing there for quite some time already. His presence was like a black pillar, making it hard for others to detect him. Suddenly, his eyes flew open, and they began to emit a cold murderous aura.

This was the guardian of the treasury. Under the protection of this expert Master Practitioner, for years, anyone who attempted to infiltrate the imperial treasury ended up losing their lives. He’d covered the entire vicinity of the treasury in his aura so that no outside activities would escape his detection.

“Is the imperial treasury a place to be casually snuck into? Withdraw, or else… don’t blame this old man for attacking.” A voice, seemingly amplified, struck towards the back of the treasury. Yun Wu’s face instantly dropped.

She didn’t expect such a small movement from her to be discovered. It seemed that she was still too foreign to this world’s powers. However, a moment later, she heard a familiar devilish laugh. Subconsciously, her heart tightened.

A figure flew out from behind the treasury. A head of unique silver hair swayed in the wind, and the man’s bewitching face was masked by a black scarf.

The corners of Long Qingxie’s lips tilted into a mesmerizing smile, but the look in his eyes was scathing. The current him was a complete opposite of how he would act around Yun Wu.

“What an arrogant old man. At your age, I’m afraid that even if I do let you attack, you wouldn’t even be able to hold up a knife.”

“Presumptuous! Who are you, to dare invade the imperial treasury? Are you not afraid that this old man will kill you?” The elder was callous, and his eyes had a glacial quality to it. He’d been guarding the treasury for years and had seen a number of sharp-tongued thieves. None were able to escape alive.

Surprisingly, the silver-haired man was capable of giving the elder a sense of danger, but in terms of strength, the man was no match for the elder. In Zhou Dynasty as a whole, the amount of Master Practitioners there were could be counted on one hand.

A tint of cold bloodthirst entered Long Qingxie’s eyes. “Kill me? Old geezer, don’t be so certain about who’s killing who. You’re just an old bag of bones. Do you really think you’re capable? Hmph!”

Anger flared in the elder’s heart, and his gaze flickered with annoyance. He waved his hand, and suddenly, a streak of powerful cyan battle spirit shot towards Long Qingxie. Beneath the black scarf, Long Qingxie smirked. He didn’t move.

Instead, a shaft of purple light, carrying with it a scorching aura, was sent forth to meet the attack.

Bang! The attack was canceled out. The elder’s pupils shrunk, and his eyes filled with surprise. “Purple innate talent, a fire-attribute at the peak of Rank Eight?”

Purple was the highest innate talent level. In past hundred years, in the Zhou Dynasty, no one aside from the Imperial Preceptor’s son, Nangong Yi, had purple innate talent.

Unexpectedly, this thief did! Moreover, the silver-haired man was a fire-attribute, which just so happened to restrict the elder’s water-attribute. That was why the man, at Rank Eight, was able to defect the elder’s attack.

“No wonder you dared to be so arrogant. However, even if you’re a purple innate talent, you’ll still die under my hands.” The old man’s mouth lifted into a cold smile, and murderous intent burst from his eyes.

Hardly had the sound of his voice faded away when the strength of his battle spirit erupted, and a longsword shot towards Long Qingxie.

VIN: I guess every time I have no idea what to put for the picture, I’ll just throw in some eye candy.