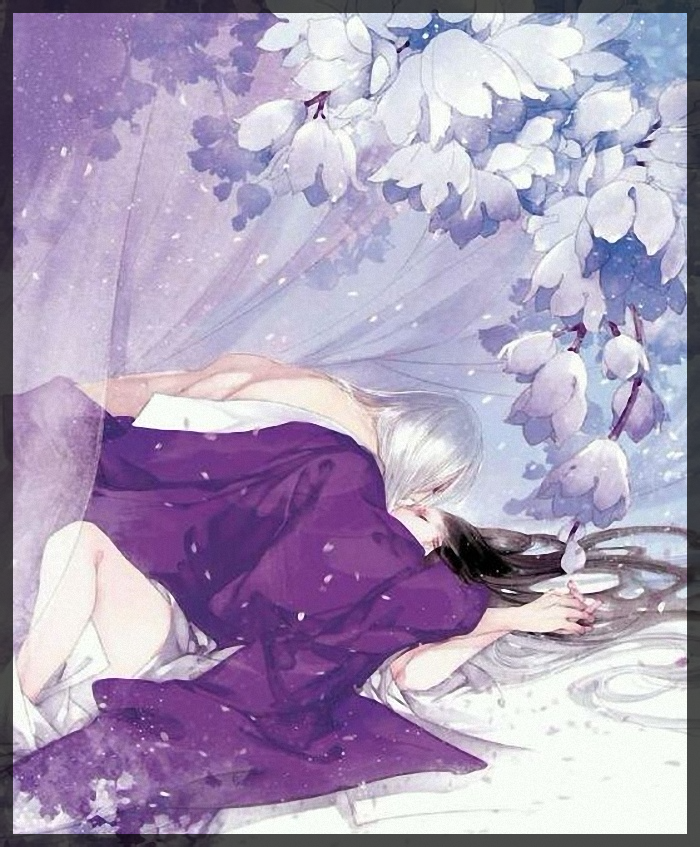 The situation seemed to be suggesting that the Third Miss had killed her own mother. Yun Qi’s face sunk, and with a flick of his sleeve, he left for the east wing. He absolutely refused to believe that his granddaughter had committed matricide.

When he arrived, he saw that the entire east wing courtyard was packed with numerous Madams and Misses.

Respectful greetings rang out. Yun Qi waved his hand impatiently and asked furiously, “What are you all gathered here for? Scurry back to your respective courtyards.” Under his command, the crowd dejectedly dispersed, leaving a few guards to follow him deeper into the courtyard.

Liu Qinshui caught sight of his arrival, and her eyes abruptly misted over. “Father… Eldest Sister, she…” He knit his brows and swung his gaze over to the nearby servants, “What are you all still dazing about for? Go help the Third Miss up.”

Yun Qi stepped into Liu Qingyue’s room. He did a simple sweep of the room and then raised his hand, upon which a small knife suddenly flew out from its hideout within a wall and landed on his palm.

The instant he retrieved the knife and saw the deep indents on the wall, his eyes darkened, and he spun around. His face was one of incomparable rage as he looked around the courtyard.

“Immediately tell Wu Gang to seal off Yun Manor; without my permission, no one is allowed to enter or leave. The owner of this knife must be found. Since that person dares to commit murder right under my nose, once I find out who it is, that person will be torn to shreds!”

His furious bellow immediately made it perfectly clear that the murderer was someone else and that the Third Miss had been made their scapegoat.

In all honesty, Old Man Yun was truly too sharp—a mere glance was enough for him to determine the real nature of Liu Qingyue’s death and conclude that the murderer had tried to utilize a scapegoat.

On the mountain peak behind General Manor.

At this time, a small figure could be seen lounging. From her position, Yun Wu could vaguely make out what was happening within the manor. When she heard Old Master Yun’s enraged roar, a cold sneer appeared in her eyes.

She had set up a scapegoat, but her target wasn’t Yun Lingshui1 That’s the Third Miss’s name.—no, it was the mysterious perpetrator. In due course, she firmly believed the perpetrator would reveal his or her tail.

The sun cast warm rays upon her body. She stretched out a languid hand to pick up the pastry lying next to her —as though she were enjoying a good show— following the ups and downs of the situation below her and feeling good about it.

All of a sudden!

“Show yourself!” Her cold exclamation rang out, and a silver needle shot without delay towards her target.

“Little pipsqueak, it’s only been three days since we last saw each other, but you want to kill your husband already?” The sound of a devilishly charming voice entered her ears, and a blur of movement was all she caught before she found herself once again lying firmly in the man’s arms.

She flashed back to three days ago when they emerged from below the cliff and he told her he had matters to attend to before handing her a set of silver needles and leaving. During those three days, she had visited the lake and exploited the vast array of herbs there to whip up a variety of special poisons that were imperceptible in both color and odor.

Most importantly, she had gathered quite a few clumps of Sage Grass, though her fleshly body was still in a state of death, and she could only drink beast blood and consume Sage Grass to preserve it.

Now, three days later, the man was pulling this all-too-familiar move on her again. Regardless of how many times it had happened already, Yun Wu refused to let herself get taken advantage of. A silver needle appeared on her fingertip, and she unhesitantly aimed it at his neck artery.

Alas, Long Qingxie’s reaction speed was extraordinarily quick; before the needle could land, he caught both of her hands and crossed them over her chest, then held her closely from behind. This position melded their bodies together perfectly.

Faint color flooded to her cheeks, and she started to struggle, but…

“I suggest you stop squirming… men are easily excited and very impulsive, you know? I’m sure you wouldn’t want me to… take you tonight, right? Hm?” His seductive voice spoke gently in her ear, causing her body to stiffen and her cheeks to instantaneously flush further in anger.

His tongue and hot breath played mischievously at her earlobe and neck, cutting off her escape.

“Get your filthy tongue off me, or else I’ll cut it off and feed it to dogs!”

“You’ll really be that cruel? Your hubby is frightened, but tell me, what should I do when your ferocious side attracts me so? Unfortunately, for the sake of your future, I’ll have to retain my tongue—I still have to use it to taste your sweetness, no?” Long Qingxie teased suggestively.

As he spoke, his slender fingers casually brushed across her malnourished mounds and continued its way upwards… a seemingly unintentional gesture that was definitely anything but unintentional.

Yun Wu’s face completely exploded with redness, and this time she couldn’t tell if it was due to anger or shame.

No matter how she struggled, she couldn’t break out of his iron grip. She felt so frustrated that she let out a thunderous yell of rage and bared her teeth, ducking her head to bite the wandering finger of the man in question.

If she couldn’t beat him, she’ll bite off one of his fingers and treat it as a meal. However, when the scent of blood pervaded her senses, a drowsy feeling suddenly came over her. Heart sinking, she remembered something about this man’s blood and realized… she had once again fallen into his trap.

This realization was especially jarring when she saw him lean down right before she lost consciousness and —just like that time in the forest— descend on her red lips.

Within the back mountain, inside the wooden hut.

Yun Wu woke up from an unusually pleasant dream. She couldn’t remember when the last time she had slept this peacefully was, and her limbs arched in a subconscious stretch.

Her body shook, her head lowered, and then her entire body froze.

Where were her clothes?

“What’s wrong? You’ve just woken up, but you already look like you want to eat someone. Were you thinking of your husband?” A devilish voice, carrying with it a smile, spoke without warning.

The man who was sitting on her worn-out stool looked at her with a wicked smile, though his gaze was blazing hot. The first thing she did was grab the old porcelain pillow2 Yeah, you read that right. on her bed and fling it at the man. Long Qingxie merely leaned slightly to the side, and the pillow flew past him to shatter on the floor.

“You’re still so angry… looks like your husband didn’t work hard enough today to relieve you of your anger,” he watched her dress as he spoke, his words incomparably ambiguous. Yun Wu felt a burst of furious gloominess. She wasn’t an ignorant girl and knew that if he really had done something to her, she would’ve sensed it. He just had an infuriatingly filthy mouth.

“Back in the forest, I remember saying that if I ever see you again, I would take your life!” Now fully dressed, her dark gaze swept over him coldly, at which he raised an eyebrow, smirked, and conveniently opened his arms, saying, “We’ve seen each other three times since then, but if you like it, then come… I’ll gift my life to you.”

Seeing his inappropriate behavior again, she inwardly clenched her teeth.

“Alright, that’s enough. What do you want? Tell me straight up, don’t beat around the bush or start spewing bullshit.” She couldn’t be bothered to play tricks with him, so she simply leaned against her bedside and glanced at him

Long Qingxie seemed to sober up too. He pulled another worn-out stool to his side and beckoned her, “Come and sit.”

“There’s no need. This hut is small enough that I can hear whatever you want to say from here.”

“Come here!” The ever-present smile that he usually kept on his face actually faded, and he eyed her with a seemingly chilly gaze, which admittedly succeeded in intimidating her to a small extent.

Eyebrows furrowed, she drew near and intended to first reach out and pull the stool away so she can keep a certain distance from him, but just as she stretched out her hand, it was captured by Long Qingxie’s larger one.

One corner of his lips quirked upwards, and he gave a sharp tug. She tumbled into his chest. As her face sunk, he then smoothly pulled her to sit on the stool next to him. “Be good, this time I won’t kid with you,” was spoken in a coaxing tone, as though he were talking to a troublemaking child.

Despite saying he wouldn’t do anything, his wandering hand was on her small, delicate one, touching and pinching.

“Long Qingxie, your despicable hand had better behave itself.” She growled. Having skin-to-skin contact with others irked her to no end, and yet here he was, straining his boundaries from time and time again. She attempted to forcibly tear her hand away, but to no prevail.

“What’s the rush? Your husband is just checking your pulse, having a look at the condition your body is in.”

The serious expression on his face made her want to curse at him: My ass!

A pulse was a pulse—and he was pressing on the center of her palm. He called that pulse-taking? Did he seriously think she was that naive?

“You little pipsqueak, your husband ran back and forth for you, and it was even more dangerous digging that tunnel to go save you. After all that, you won’t even allow me the privilege of touching your hand? Ah, such a heartless fellow you are…” He unexpectedly did loosen his grip, but shortly after, it went to tease up her chin. As his mesmerizing face neared, he murmured, “Though your husband doesn’t know how to take your pulse, your husband does know how to revive your body!”

All of a sudden, his low voice became the epitome of temptation, for he had hit her weak spot. Indeed, ever since she left the Forbidden Grounds, she had been thinking about how to revive her body. Unfortunately, not even the necklace spirit knew of a way.

“You know? What method?” With his finger holding up her chin, their eyes were placed on the same level.