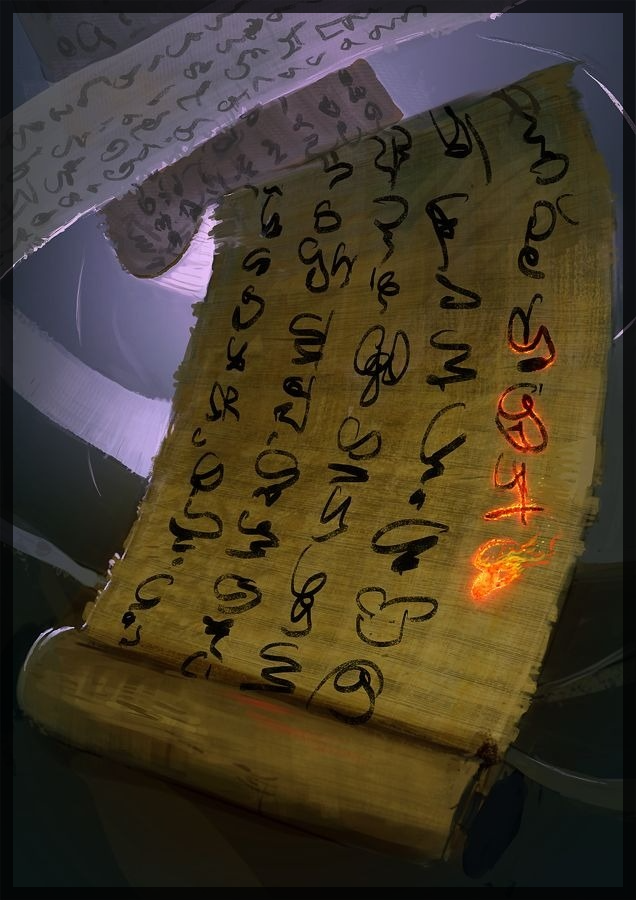 Bang! Another forceful collision. Finally, the enormous dragon’s body fell from the air. Its wings looked as though they were merely fluttering.

Yun Wu’s condition was not much better; her clothes were in tatters, and some fresh wounds were dripping with blood. Not to mention, this was her state even with the defensive ability protecting her.

By comparison, in terms of injuries, the dragon was actually in a much more advantageous position, since its scales were on par with a set of invulnerable armor. At most, the impact of slamming against the wall numerous times had left a few red marks.

Ironically, it had knocked itself into confusion, which was the reason for its cessation. Yun Wu gasped for air. Likewise, she had lost the strength to continue punching. Nonetheless, she kept her grip on the dragon’s neck fur and panted, “Let’s take a break, I need to catch my breath.”

“You….. I’ve never met a human as difficult as you before.” The Redfire Dragon gnashed its teeth.

She smiled and laughed at its words, “I’ll have to thank you for your praise. However, I’ve never met a dragon as ruthless as you before either. I appreciate that.” Actually, in both lives, she had only ever met this one dragon.

The Redfire Dragon snorted, but its mood had improved a bit. “Hmph, I don’t care for your appreciation. Don’t think I’ll let you off just because you said a few flattering words.”

The dragon’s change of self-address from “this prince” to “I” also gave away its change in attitude. Yun Wu didn’t mind its haughty response. She asked curiously, “Seriously though, Brother Dragon, why are you locked up in this place? From what I see, you’re mighty and formidable, so how come this little basement is able to confine you?”

Even though the Dragon Ascension Scroll had informed her that the dragon was sealed up by a Summoner belonging to the manor, she didn’t quite understand the strength of Summoners. How was the Yun Summoner able to imprison the Redfire Dragon for so long?

The amount of wrath it felt could practically be heard in the grating of its fangs. Alas, after so long, the Redfire Dragon’s target had probably already died and disintegrated into ashes.

“Why wait for that day to come, huh? Why not just charge out today?” Yun Wu continued to prob cautiously. The Redfire Dragon’s eyes burned with anger, its words startled her. “You think I don’t want to charge out of here? That Yun Tianxian used a Millennium Contract spell to bind me to this underground palace. Even if I managed to reduce this place to shambles, I would still have to wait out the full thousand years.”

Was that the strength of a Summoner?

Her acquired memories had told her that Summoners were now figures of legend. This was because hundreds of years had already passed without a single Summoner appearing on the continent. Therefore, quite a few believed that Summoners were only legendary figures now.

Despite that… on this day, Yun Wu felt itchy fervor in her heart, along with yearning.

“Are you saying that as long as I can revive my body, I can become a Summoner?” She inquired, her heart beating faster as her eyes brightened.

“I didn’t say it’s guaranteed; just that there’s a possibility.”

She was struck by a sudden burst of inspiration. She stretched out her hand and knocked the Redfire Dragon on the head. “Hey, Brother Dragon. If I manage to get you out of here, how will you repay me?”

“You can get me out of here?” The dragon’s head lifted, but of course, it was incapable of seeing Yun Wu, as she was seated directly atop its head. The dragon chuckled, “Little girl, it’s not that I’m looking down on you, but… you aren’t even enough to fill the crevices between my teeth, and yet you want to break me out? Don’t kid.”

“You don’t need to know if I can do it or not, you just need to answer. Do you want to leave this place?” Yun Wu asked, knocking the dragon’s head again.

The Redfire Dragon turned its head, its voice full of dissatisfaction, “Of course I do, who would want to stay in this hellhole?” She immediately smiled, “Then let me out.”

“Let you out?” The Redfire Dragon widened its eyes. Its gloomy voice rumbled, and Yun Wu raised her hand to once again cuff it on its head. “I’ll say, why are you so stubborn? You’ve said it yourself; I’m not even enough to fill the crevices between your teeth, so why don’t you just let me go? If you don’t let me go, how will I be able to become a Summoner and come back to rescue you?”

The dragon roared angrily. “You, human, do you think I’m stupid? If I let you go, would you still return? You swallowed my Dragonfire Pearl, and you think I’ll let you go?”