The apocalypse’s heavenly master poorly versed in the world’s affairs (4.1)

This Chapter is sponsored by Kurai. A heartiest thank you for supporting me.

The entrance to the air defense facility was indeed in the forest where Lu Heng was transported to. Concealed at the foot of the mountain in a remote and invisible place, a multitude of wild weeds covered it up completely. If specific location was unavailable, one could only rely on manually searching inch by inch, and it was uncertain how long it would have taken.

Perhaps it was because of the strength of the mutated beasts that had inhabited this place before and regarded the mountain forest as their own territory. After the mutated beasts were removed by Lu Heng, the forest was clear and there were no other living things. That saved a lot of trouble for the mercenary team. Leaving a small number of people on guard outside, Qin Yi took the remaining people into the air defense facility.

Passing through the long public section at the front end, the team finally stopped in front of a heavy alloy door.1 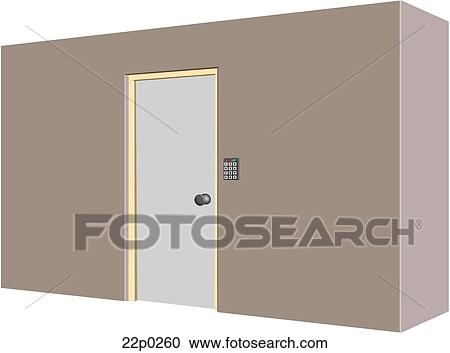 The place where strategic materials were stored was built according to the standard of ground penetrating bombs. All six sides were made of special alloys with a thickness of more than one meter. Even if it was hit head-on by a ground penetrator, it will only leave a shallow pit. 2 common name: Bunker buster

If one wanted to enter it, one could only go through the front password protected door. Above the gate hung a warning sign: Military Site. Below the bright red letters were rows of smaller fonts, which probably meant that if the password was mistyped twice, the alarm would be transmitted to the police. When the alarm would have been over, an explosive embedded in the mountain will be detonated and the whole air defense facility will collapse.

“Is this password in the information?” Qin Yi enquired.

Jiang Sile nodded confidently and began to enter his password when he got to the door.

“Wait!” Suddenly someone in the team cried out to stop him.

Jiang Sile looked back and saw that it was Pan Rongxi, and with a supercilious look sneered: “You don’t say! Do you have something else, huh?”

Pan Rongxi was also not annoyed, and gave a good-tempered smile: “I studied civil engineering in university, when I wrote my graduation thesis and I dealt with some information about military facilities. Although these books were only sketchy references, but this password lock should not be so simple. Isn’t it better to be careful?

Seeing Qin Yi’s face seemed to agree with him, Jiang Sile was ignited with the flames of anger: “You can go through the information that my father left behind, he had participated in the construction of this air defense facility!”

“Little Le.” Qin Yi’s expression sunk. On ordinary days, regarding Jiang Sile, he was too lazy to intervene in their private conflicts. But now was not the time to let personal feelings supersede the execution of task. Qin Yi was not very smart, but he had some basic judgment. This concern raised by Pan Rongxi was quite reasonable.

In the team, most of them were Qin Yi’s former comrades in arms, a bunch of ruffians who would lick the blood off their knives and brave through wind and rain to complete their tasks. They had no idea about structure of buildings, passwords and so on. Among them, the most highly educated were Mu Fei and Pan Rongxi. Before the apocalypse, Mu Fei had been studying for a ph.D., and because of the relationship with his father, he had participated in the peripheral design of military installations that were not too confidential.

Jiang Sile wanted to say something, but he swallowed his words when he saw Qin Yi’s face. Although Jiang Sile was arrogant, as long as Qin Yi’s expression sunk, he would no longer dare to act capriciously.

“Ah Mu, you say.” Qin Yi turned to Mu Fei. 3 ‘Ah’ is a way to call someone affectionately and show familiarity

Mu Fei took a look at Jiang Sile’s face. His face was very ugly causing his heart to be somewhat hesitant. Mu Fei originally thought the same as Pan Rongxi, but he knew that Jiang Sile would be half mad if he only saw himself approving Pan Rongxi. Recently, Jiang Sile had been very frigid, and Mu Fei did not want to further jeopardize their relationship.

“Mufei, now is not the time to be entangled with private affairs!” Qin Yi saw Mu Fei’s indecisive appearance, and his tone was more severe.

“I think there’s some truth in what Rongxi said. I haven’t dabbled in this aspect of password locks. But in terms of the scale and level of defense of this air defense facility, the key place to put strategic materials should not use simple password locks. Mu Fei saw the situation and said out his thoughts systematically and in full detail.

Jiang Sile was originally an impulsive person. He did things without considering the consequences. Listening to Mu Fei say so, he got angry, reached out and clicked on the password input interface.

But there was a bright red countdown on the screen, thirty seconds. Within 30 seconds, if they didn’t enter the password, it would give a password error. In order not to waste this precious opportunity, Qin Yi had to give in to Jiang Sile for a try.

Impossible, Jiang Sile was shocked. He looked back to explain something, but saw Pan Rongxi in the crowd show a sarcastic smile. Seeing this smile, Jiang Sile was overcome with anger again. He couldn’t be wrong. He must have been too nervous and accidentally touched the key next to him. Jiang Si hand hadn’t left the screen yet. He pointed his finger to the side and tried again.

“Absolutely it’s this password. I must have been nervous to mistake it just now.” Jiang Sile hastily explained to Qin Yi on the side with a sentence, and carefully entered the password which he had memorized countless times in his heart.

Password error. The number of errors has reached maximum and the facilities will be destroyed soon.

I know this is super unprofessional but I may not be able to get chapter 43.1 out in time. I have a class test on Wednesday and I won’t have any time to translate before then. Still, I will try my best to get it out in time. As you know, even in parts, the chapters in this novel are longer than most other novels. And I don’t want to have a subpar quality chapter.