The apocalypse’s heavenly master poorly versed in the world’s affairs (2.1)

This chapter is sponsored by Anra7777 and Brenda M., thanks for your support.

Lu kept himself calm and waited for the dizziness from transmigrating to dissipate. After his eyes and ears cleared, Lu Heng felt that he was holding something hard in his hand and looked down. It was the four-finger wide wooden sword he had seen on the client’s back before. On the hilt of the wooden sword, the words “di chen”1to wash off dust were engraved.

This di chen sword was not an ordinary object, rather the powerful ancients actually preserved the core of a hundred thousand year old thunder peach tree which used to cultivate in the true cultivation plane. Wielding it would blend one with the voice of a tempest, and provide the strength to restrain demonic energy.

Lu Heng immediately put the di chen sword on his back and sorted out his current situation. It had now been a month since the annihilation of the Hidden sect. At the very last moment, the remaining members of the sect exhausted all their spiritual energy and activated the transmission array to force out the most powerful and talented Yunlan. The teleportation transferred him randomly to an unknown mountain forest.

It’s just that a month had already passed, how could Yunlan still linger among the nearby mountains and forests? Now it was time to hurry out of the mountain forest, search for a place where human beings gathered and find ways to inquire about the whereabouts of the Lingyuan. Presently, it hadn’t been long since the demonic energy erupted, and the super base where the Lingyuan was stored still remained unknown. If one had to guess, the Lingyuan should still be on the thief.

This matter should not be delayed. Lu Heng chose a direction and prepared to leave the forest.

A few hours later, Lu Heng looked at the familiar scenery and fell silent. He realized why it’s been a month, and the Yunlan had still been wandering in the mountains. Because this body’s sense of direction was zero. No saying zero would still be an exaggeration; it should be a negative number. This Yunlan was a complete idiot.

But since his soul was put into this body, as long as he paid more attention to it, it should be no problem to walk out of the forest. As an executive whose goal was to rise to the top, how could he be overwhelmed by such a small difficulty? Lu Heng was not discouraged. He chose another road and started walking. At the same time, he paid attention to the changes of the surrounding scenery with a with 100% concentration.

{Can you help me turn on a navigation function, little assistant?} Lu Heng gave up on the innate skills of his body and had no choice but to turn to his little assistant.

After a moment, the little assistant’s voice of frustration sounded.

{No, I was warned. Navigation system was going to crash.}

Having his last hope strangled, Lu Heng sat on the ground, ready to cry but had no tears. It was a bad start. Lu Heng fell backward and looked at the broken sky. He was thinking about a major issue of survival, and what Yunlan had eaten in the past month. It was important to know that animals and plants on this plane were mostly infected by demonic energy and could no longer be used as food.

Only a few hours of continuous travel, and a lot of physical energy was consumed. Lu Heng felt a little hungry. After searching his memory, Lu Heng found that he was indeed from a sect of heavenly masters, and that there was such a heaven-defying thing as fasting pill. Eating one could sustain someone for a whole day.

Lu Heng’s spirit received a shock. He fumbled in the small package he was carrying, took out a small porcelain bottle, elatedly pulled out the cork and poured into his palm. Absolutely empty.

A bleak wind blew through Lu Heng’s hair. Lu Heng felt that a few more snowflakes would be more in line with his current mood. Are you going to be the first executor to be kicked out of the plane for starvation?

“Help!” A cry of alarm drifted into Lu Heng’s ear.

This voice sounded like celestial music to Lu Heng. He leaped up and galloped towards the direction of the call for help.

A young man could be seen stumbling in the woods, flustered, and from time to time uttering a few cries for help. In this forest, the terrain was complex, and this beautiful city-bred young man, before he could run far, tripped and fell into the ground. The ground was covered with humus, so falling down did not cause much harm.

The danger came from behind him, a tangled mess of flesh and muscle, ugly face, already its original features unrecognizable, the demonized beast immediately pounced. Claws several inches long assaulted the youth’s back, and if successful, one feared that the whole back would be ripped open.

In the crucial moment, a person appeared from behind the tree on the right side and kicked the nearly two-person-long beast away several meters with one foot. The young man’s legs went soft and he had no other option other than to foolishly sit on the ground and marvel at the person with God-like strength. The man was very fast. Before the beast could stand up, the wooden sword in his hand pierced straight through the skull, and it could not be any deader.

“Very strong.” The young man uttered two words foolishly. One should know, the skin of this mutated beast was so hard that even bullets could barely make a little scratch. Unless it was a high-level offensive ability, it’s a fool’s dream to think about harming such beasts.

The man in front of him had just used a wooden sword to penetrate the skull of the beast like tofu.

Lu Heng pulled out the di chen sword, and a pool of stinking pus blood came out of the incision. Fortunately, di chen’s material was special, dirty objects could not stain its body, and sword body was still clean as before.

Putting away di chen, Lu Heng went to that still paralyzed youth sitting on the ground like before and started watching him quietly.

Only then did the youth calm down from the extreme fear and shock, and he noticed that the neat youth was unexpectedly young. That person was staring at him without saying a word, which made the youth feel a little nervous. But the young man was good at deciphering people’s expressions from their eyes. He saw that the eyes of the person in front of him seem to be brimming with the big words: Hurry up and talk to me.

“Thank you for saving me. My name is Pan Rongxi.” Pan Rongxi stood up awkwardly and bowed to the Lu Heng.

“Yunlan.” Lu Heng saw that the person in front of him seemed quite tactful and interesting, which made him feel at ease. This body originally had some social phobia, and unless it was necessary, would never take the initiative to talk to strangers.

Pan Rongxi saw that Lu Heng seemed to be alone. He knew that he could never walk out of the mountain forest on his own. He gave it a bit of thought and said, “My friend and I were separated by accident. Could you please take me out to meet up with him? You can tell me if you have any requests.” 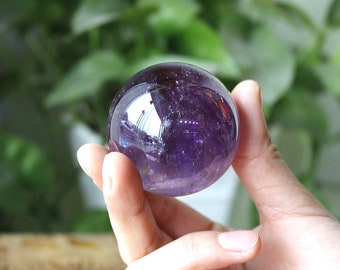 Probably something like this? Higher grades should be clearer/whiter

Lu Heng looked at the glittering and translucent crystal in Pan Rongxi’s palm and found that there was a faint spiritual power on it: “What is this?”

This man did not even know the crystal nucleus. Wasn’t he an ability user? How could he have such a strong fighting power without any abilities? Pan Rongxi thought, anyway, this was a well-known thing, there was nothing to hide, it was better to tell the truth, along with selling his goodwill to this powerhouse.

“This is the crystalline nucleus condensed from the brain of a zombie or a mutated animal, which can help the ability users to upgrade their powers. But I’m not an ability user. It’s not clear to me how to absorb it. Pan Rongxi thought for a moment and added, “My friend is an ability user. You can meet him with me. I’ll vouch for you and let him tell you the absorption method without reservation.”

Lu Heng nodded, signaling Pan Rongxi to follow and turned around to leave.

“Wait a minute, the nucleus in the brain of that mutated animal hasn’t been taken yet.” Pan Rongxi had always been tactful, took the crystal nucleus, wiped it clean and sent it to Lu Heng hands.

Lu Heng did not say anything polite. This was his trophy. He took it into his arms and turned around and left.

“That, the way out of the forest is…” Pan Rongxi hesitated for a moment and voiced it aloud.

Part 2 will be tomorrow.